July 1, 2022, marked the 25th anniversary of the unification of the City of Takoma Park into Montgomery County, ending 107 years of divided jurisdiction between Montgomery and Prince George’s Counties and capping a 17-year effort to become One City – One County.

From the Beginning – 107 Years Divided

Takoma Park’s divided jurisdiction began when B.F. Gilbert bought his first parcel of land in 1883, subdivided it into streets, blocks, and lots, and called it “Takoma Park.” That initial purchase of 100 acres straddled the B&O Metropolitan Branch railroad line and the District of Columbia-Maryland boundary line. At the time, the portion in Washington was in unincorporated Washington County, DC and the portion in Maryland was in unincorporated Montgomery County. Gilbert continued to purchase land in both Montgomery and Prince George’s Counties. When the State of Maryland chartered the new Town of Takoma Park in 1890, the boundary encompassed lands in both counties.

The difficulties of managing a town in two counties arose early. Town Council minutes discuss the challenges of working with two counties with different laws for taxation and other matters. For nearly 100 years Takoma Park lived with these problems. Fast forward to the mid-late 1970s when citizen activists began seriously discussing unifying into one county.

The argument for unification boiled down to two points: inefficient local governmental services and schools.

For elected officials and City staff, working in two counties meant tracking and following two sets of county laws for taxes, housing, planning and zoning, licensing and permits, alcohol, animal control, social services, and more. Trash picked up in Montgomery County went to its landfill; trash picked up in Prince George’s County went to its landfill. Takoma Park police carried two sets of ticket books, one for each county, and had to appear in two different courts forty miles apart. City ordinances had to be constructed to comply with both sets of county laws. Everything the City did had to be done twice.

And for residents living near the dividing line between the two counties there was persistent confusion and headaches. In some cases, houses were divided, with living rooms and bedrooms in different counties. Police, fire, and other emergency responders were confused about where their jurisdictions began and ended. Cabs and pizza deliverers got lost (or refused to come).

And finally, when it came to state and county issues, the divided city of Takoma Park had little political clout.

For several years a bill was introduced annually in the legislature to change the county line. Each year the opposition from Prince George’s County’s elected officials doomed the prospects. The City held advisory straw votes in 1982 and 1985 to demonstrate resident support for unification.

This unexpected development breathed new life into the unification efforts in the city. Support was also growing among the many small municipalities in Prince George’s County. Citizen activists and city leaders had learned from prior defeats and became more adept at lobbying Prince George’s County leaders. Efforts continued to fail, but support was growing, and the votes in the legislature were narrowing.

By 1993 Mayor Ed Sharp and members of the City Council such as Kathy Porter and Bruce Williams (both of whom went on to become mayors of Takoma Park) began working closely with citizen activists. This group included Jan Schwartz, Tom Gagliardo, Norm Gleichman, Marie Ritzo, Sherry and Ed Mahon, and many, many others (nearly all from the Prince George’s side of the city and nearly all principally concerned about school issues) under the banner of One Takoma. City Manager Bev Habada had deep roots in Prince George’s County municipal government and worked her connections. It was another unsuccessful year but the campaign continued. The newly elected Mayor and Council began their terms with a renewed effort in November 1993.

The opportunity for legislative success came in 1994. Long-standing unification opponent Prince George’s County Executive Parris Glendenning announced his candidacy for governor of Maryland and subsequently dropped his opposition to unification. Multiple candidates to replace Glendenning campaigned in the Democratic Party primary that spring, all supporting unification. Looking back in 1997, Ed Sharp attributed the ultimate success of the effort to the fact that Del Guidice had moved out of Takoma Park to Hyattsville and thus gained credibility in Prince George’s County as a now non-Takoma Park resident advocating for unification, and to resident Peter Franchot, who “provided candid and skillful advice on how to get the unification bill passed.”

The bill under consideration by the legislature would not itself unify the city. Rather, it would grant the right of the residents of the city to vote on whether to unify in a binding referendum. Two principal arguments were advanced: the efficiency and complexity of services and the right of the people to choose. While support was generally strong in the House of Delegates, the State Senate was a different matter.

Senate President Mike Miller, a Prince George’s County resident, remained opposed and the Prince George’s Senate delegation took their cues from him. One Takoma lobbied heavily, making frequent trips to Annapolis to testify and meet with members of both county delegations.

The House passed the bill and sent it to the Senate for consideration, with Senate President Miller still opposed. However, as the session was ending, Miller withdrew his opposition, and the Senate passed the bill, giving the green light for a city-wide referendum. Governor Schaeffer signed the bill in May 1994 – with Miller covering his face in the signing ceremony picture!

With the state’s approval for a binding referendum, it was now up to the residents of Takoma Park to decide if they wanted to unify. The referendum was set for Election Day November 7, 1995, the date of the next city election. Meanwhile, there was a new wrinkle: in late 1994 residents of Pinecrest and other nearby neighborhoods, an area roughly bounded by Eastern, Kansas, Gude, and New Hampshire Avenues petitioned to be annexed into the City. This area, part of unincorporated Prince George’s County, pleaded “take us with you.”

Just outside the corporate boundaries of Takoma Park, and long ignored and underserved by the county, residents of the area saw annexation into Takoma Park, and then eventual unification into Montgomery County, as an opportunity to improve their neighborhoods, although some in Prince George’s County saw this as a last minute land grab by Montgomery County. But with the City Council’s go-ahead, a vote was held among the residents of the area in August 1995. Their approval came days before the deadline for finalizing the November binding referendum. The map of Takoma Park now included the annexed areas – but the city remained in two counties.

The final hurdle for unification was looming and the voting strategy was counterintuitive to many. Under the terms of the bill establishing the referendum, residents had to not only agree to unify, but also agree on which county. The phrasing of the ballot required Montgomery County voters to vote “no” to not unify into Prince George’s County; Prince George’s voters had to vote “yes” to unify into Montgomery County. Otherwise the results would have nullified each other and unification would have failed. One City – One County activists mobilized to support unification into Montgomery County. None of the members of the Takoma Park City Council faced opposition in the 1995 city election. It was all hands on deck to approve unification into one county.

Thus it was that in November 1995 the voters of Takoma Park overwhelmingly voted in favor of unification into Montgomery County (2,382 in favor, 272 opposed). Now it was just a matter of time.

The date for unification was set for July 1, 1997. Now the work shifted from citizen activists and political leaders to City staff. It would take a year and a half to implement the complex set of changes needed to accomplish the transition. Under the leadership of city planner (and later city manager) Suzanne Ludlow, a task force of City, Montgomery County, and Prince George’s County officials worked through some eighteen different issues: housing, zoning, social services, business licenses, alcohol licenses for stores, police and fire services, emergency services (911), recreation, and more.

One of the most difficult issues to resolve was schools. The Montgomery County school system faced the challenge of absorbing hundreds of students moving from Prince George’s County schools, and some from private schools. The schools in Prince George’s County all lay outside the boundaries of Takoma Park, requiring all the students to be accommodated in existing Montgomery County Schools. Fully incorporating these students into local Takoma Park schools would take another few years.

Becoming unified also required actions by residents. City staff and volunteers prepared and hand delivered welcome packages to the residents on the Prince George’s side of the city, with detailed “to do” lists on topics including changing voter registration, changing drivers’ licenses and auto registration, notifying insurance and mortgage companies, and more.

Unification:  One County, One Community, One Voice

On July 1, 1997, all Takoma Park residents were united in Montgomery County.

As a result of Unification:

For Takoma Park as a whole, one of the greatest impacts of unification was gaining increased respect and attention, and a stronger voice in county and state government – as well as a greater sense of community.

Historic Takoma thanks the many individuals who have taken the time to share their memories and files to make this project possible. We would like to hear from others as well: why did you support (or not support) unification, what activities did you participate in, do you have memorabilia and records? If you’d like to share your experiences, please write to us at archives@historictakoma.org

Learn more about the background and story of unification.

Find a summary of the history of unification here.

A more detailed version, Countdown to Unification, was published in the July 1997 Takoma Park City Newsletter.

ONE CITY – ONE COUNTY The Unification of Takoma Park – this Takoma Park television recap was prepared in 1998. Listen to the stories of those who lead the 17 year effort.

1997 Ceremony – watch the full presentation moderated by Mayor Ed Sharp, tracing the path of unification and featuring many of the participants.

Both the Takoma Park City Newsletter and the Takoma Voice extensively covered the story of unification efforts in from the late 1970s through 1997. Copies of both publications are available in the Historic Takoma Reading Room. At this time the papers have not been indexed.

Historic Takoma’s Archives contains papers and records that include materials about unification. At this time access is on an appointment only basis as we upgrade our archives software and access. Look for online access in the coming months. Meanwhile, for an appointment write to archives@historictakoma.org.

Images illustrating the journey to unification. 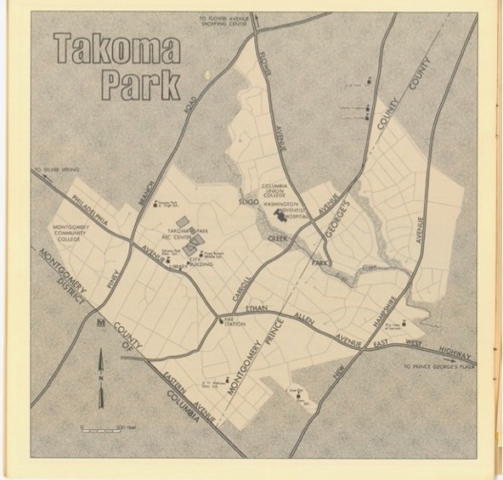 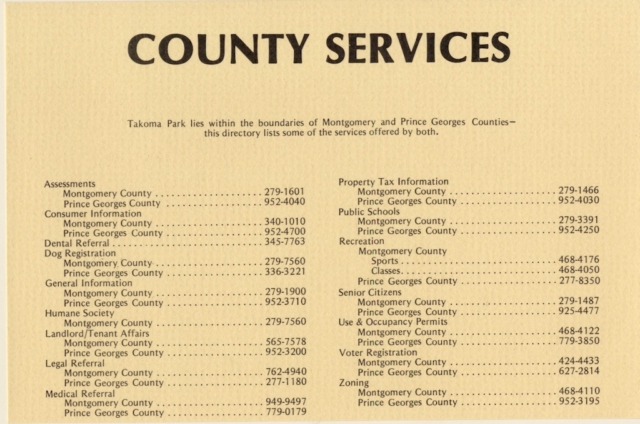 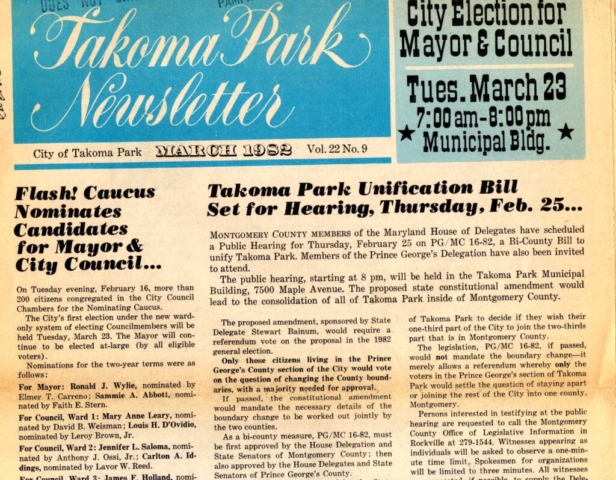 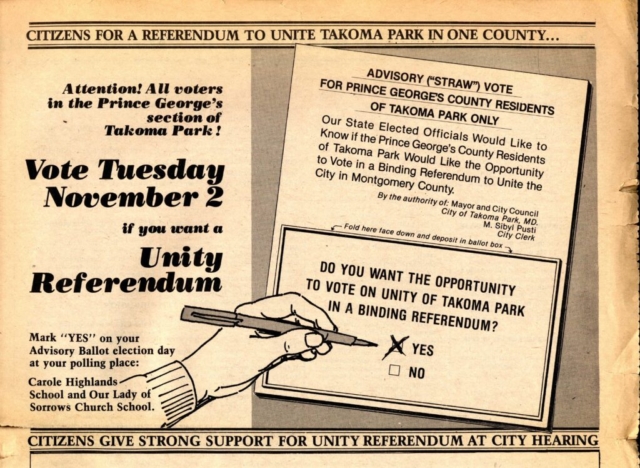 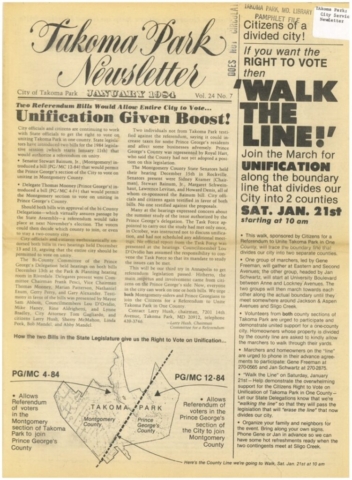 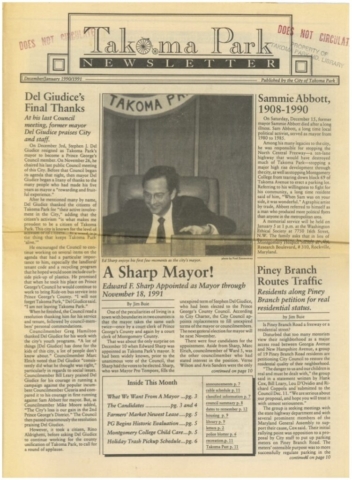 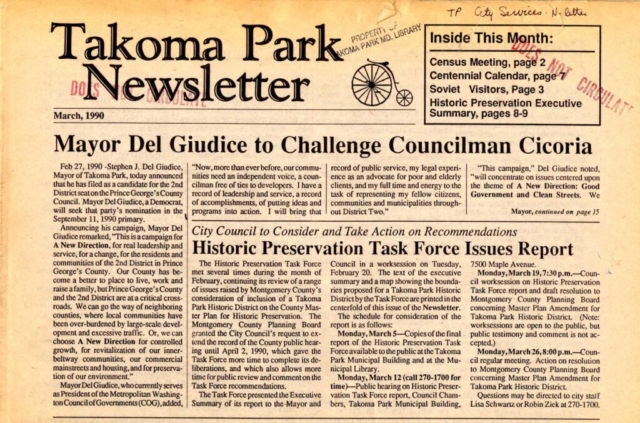 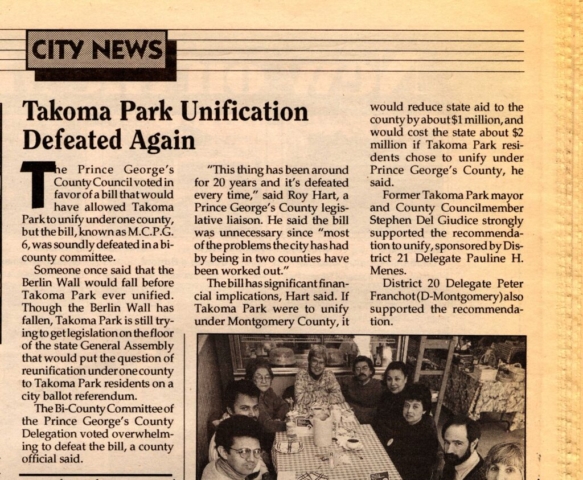 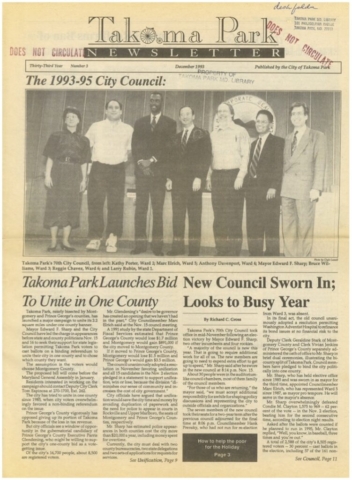 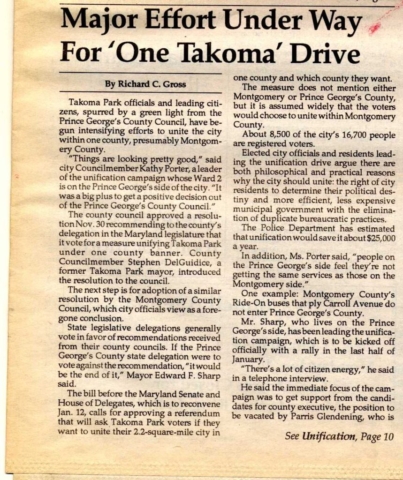 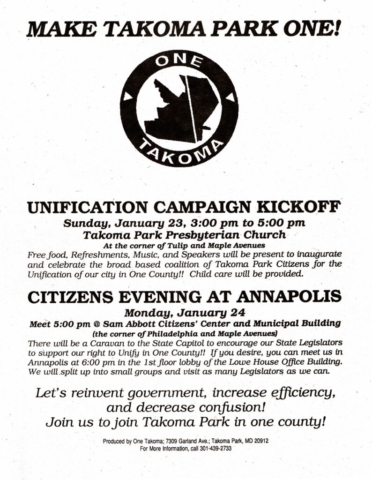 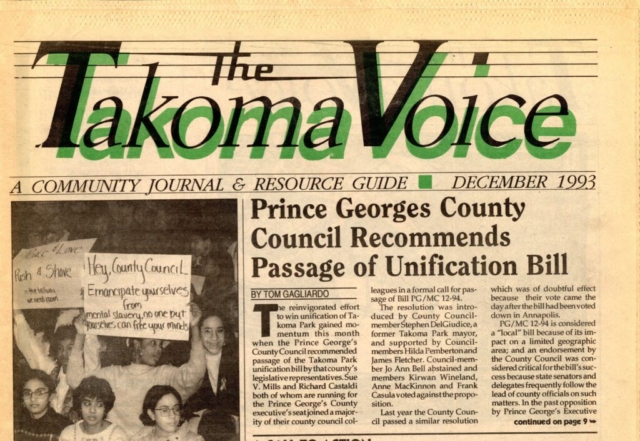 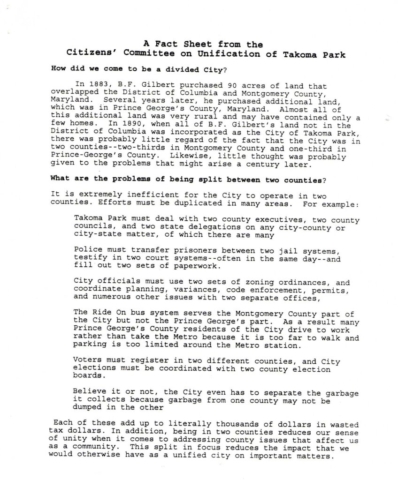 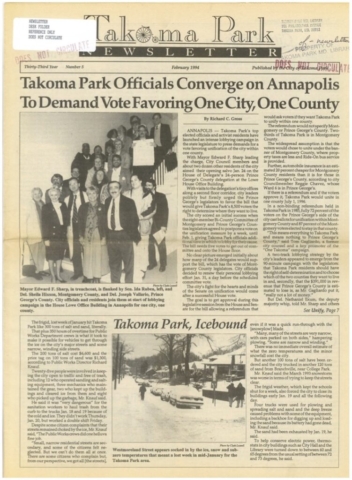 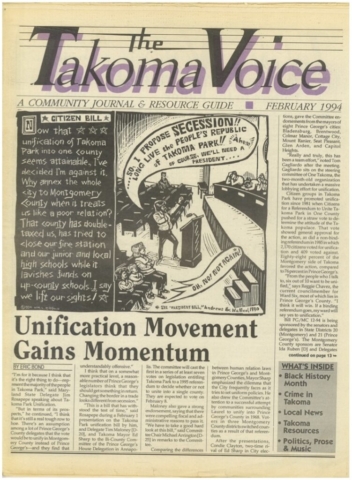 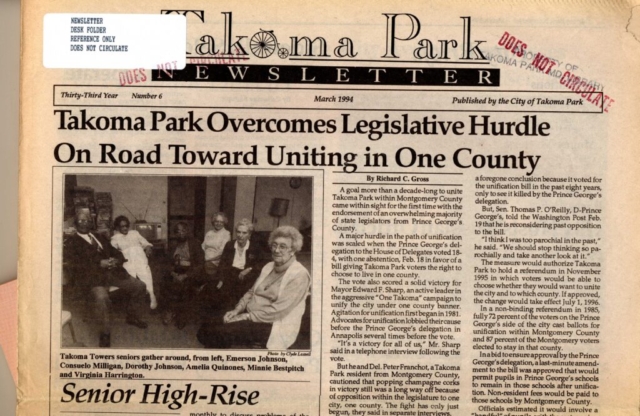 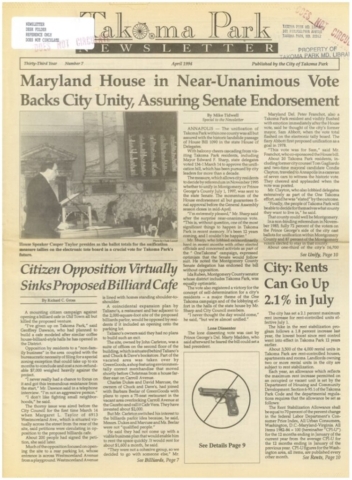 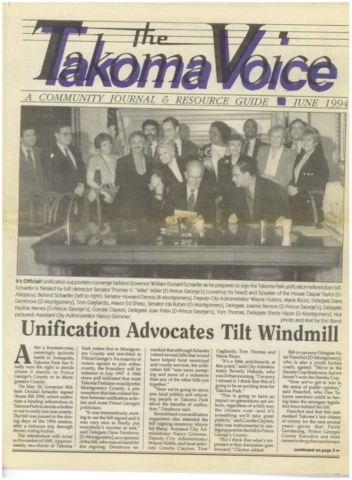 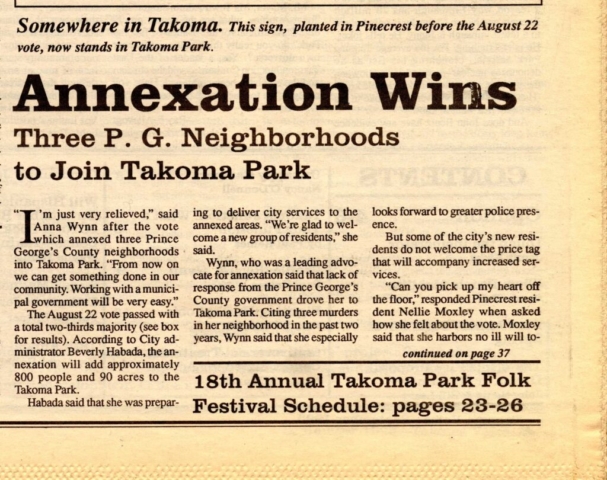 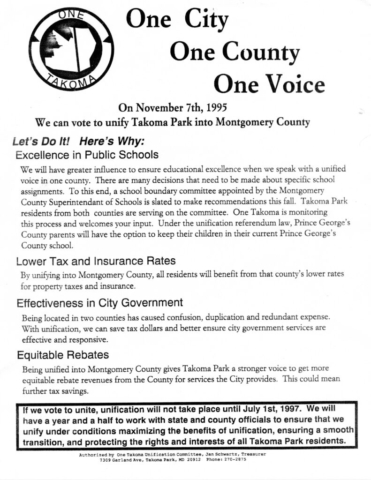 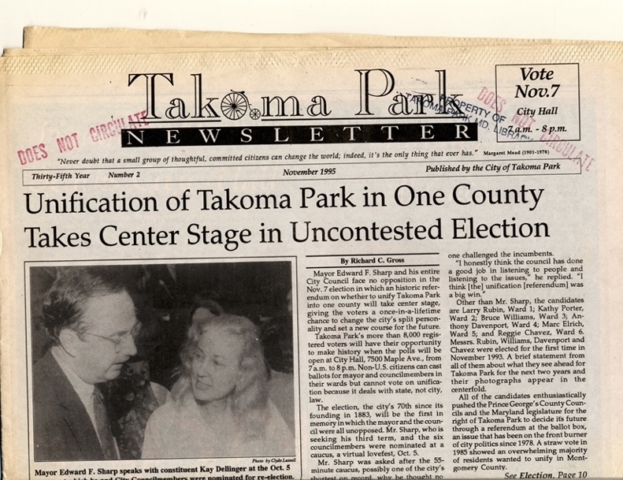 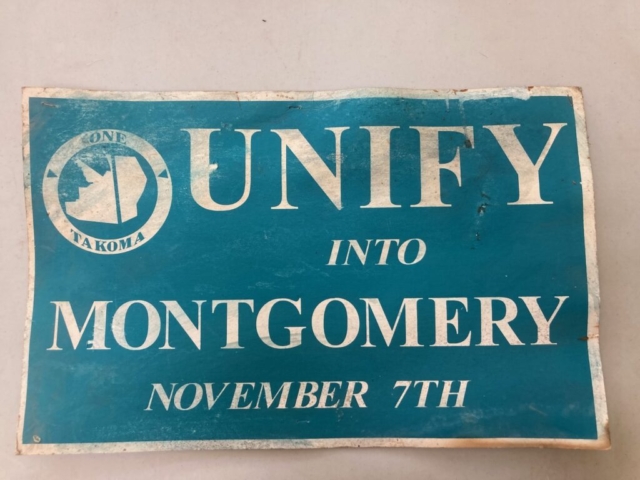 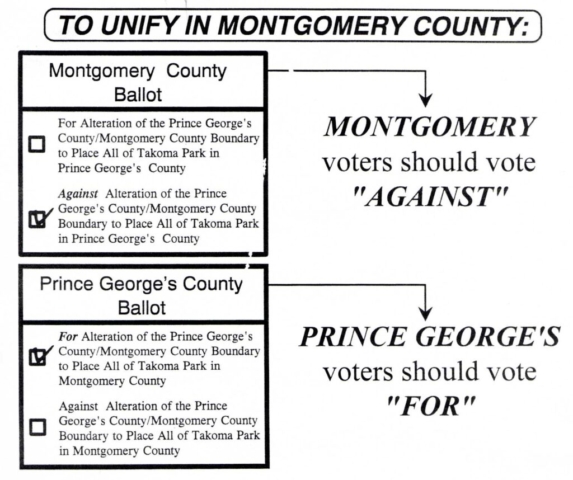 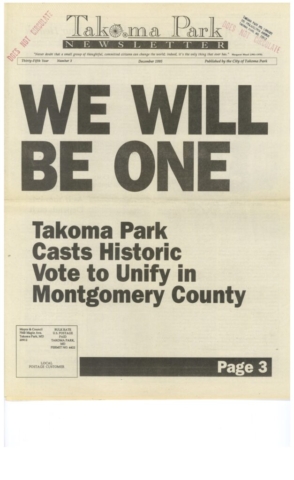 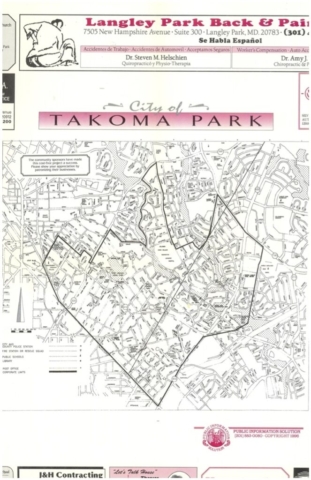 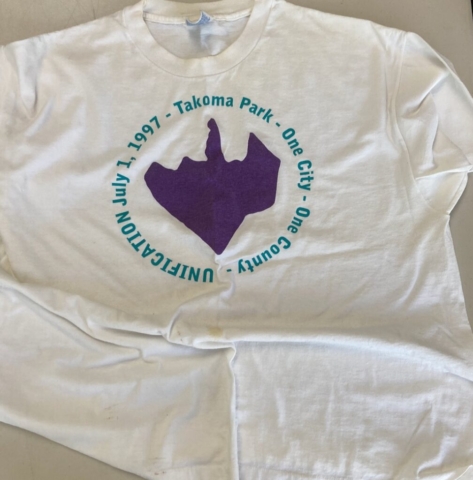 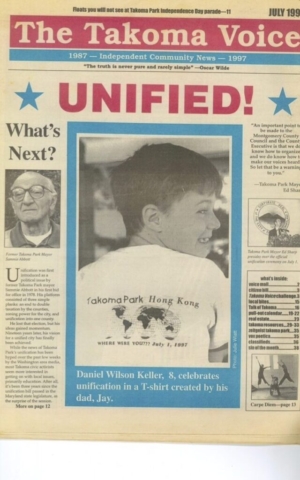 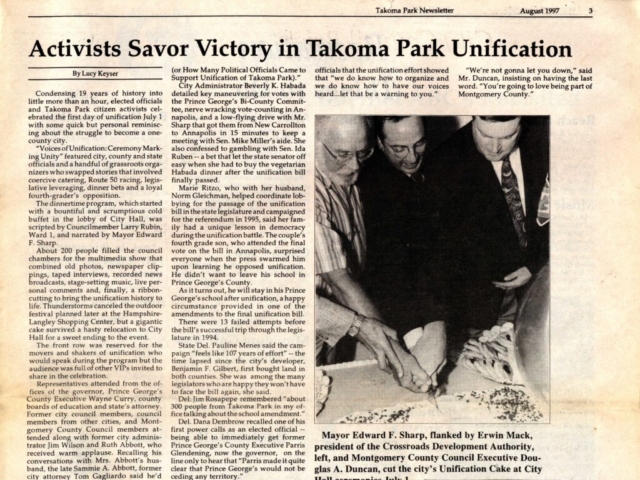 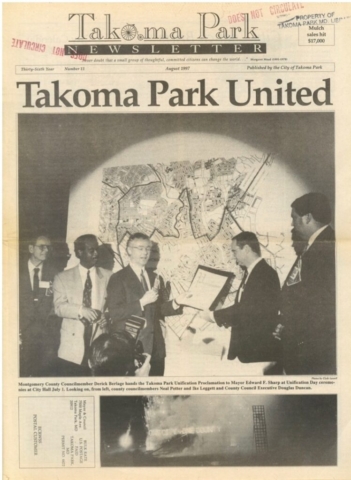 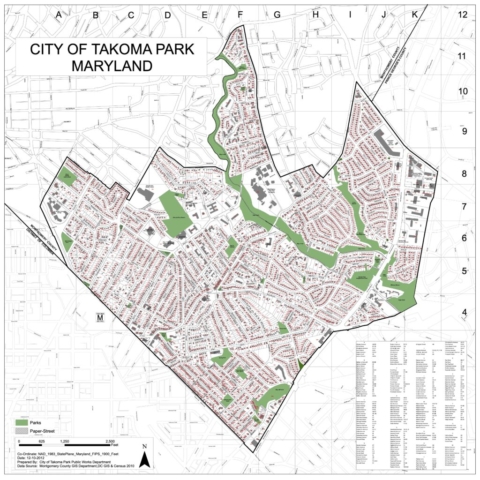